Femtosecond pump-probe experiment is typically achieved by splitting the femtosecond pulse into two identical pulses. Optical path of each pulse is precisely controlled by a motorized translation stage. Finally, the relatively delay-varied two beams are combined at the object material. A time window totally depends on the scan range of the translation stage. A pump, which is one of replica, has relatively large intensity, and is tuned to a specific wavelength within the absorption region of the material. Typically, a probe, which is another replica, covers broad spectral range from 350-1100 nm using white light continuum generation. Spectral and kinetic data from the femtosecond pump-probe experiment is used for investigating photo-excitation events with ultrafast time resolution i.e. photo excited carrier dynamics. Lock-in detection, which involves chopping the pump pulse, is used for increasing signal-to-noise ratio (SNR) because of intrinsic low SNR of the photo-excitation events. Sometimes, especially with the low repetitive laser, the probe beam is split into two to generate reference beam, which propagate sample without overlapping with the pump beam. And the probe and its replica are detected respective photo detector. 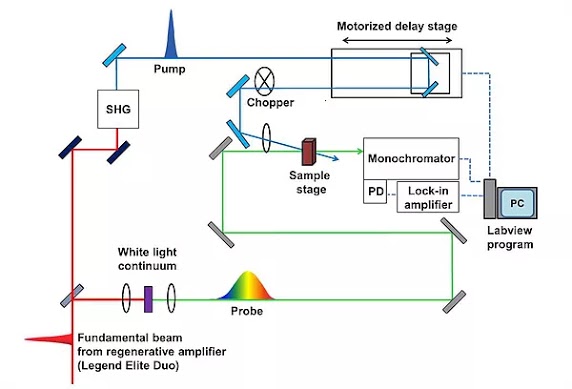 The lock-in amplified signal was collected in time domain by controlling motorized delay stage and in spectral domain by scanning wavelength using the monochromator. Consequently, ultrafast kinetics and spectra of the target sample could be measured. And such procedures were managed by a Labview (National Instruments) program.

Differential transmission (ΔT/T) can be both positive and negative values depends on which dynamics are involved. Positive DT represents increase in the transmission of probe while the pump is active, which means photo bleaching (PB) or stimulated emission (SE) occurs. While, photo-induced absorption (PIA) yields negative DT signals.